Spice up your docs, blog posts and Tweets with some pretty screenshots!
The following is a list of 20 free tools, that will generate nicely formatted screenshots of code, device mockups and embedded info.

Ray.so developed by the team behind Raycast, generates clean and minimal code screenshots.
You can also specify options via GET URL params, so you could programatically generate an image (e.g. using this shell script, or this VS Code extension). 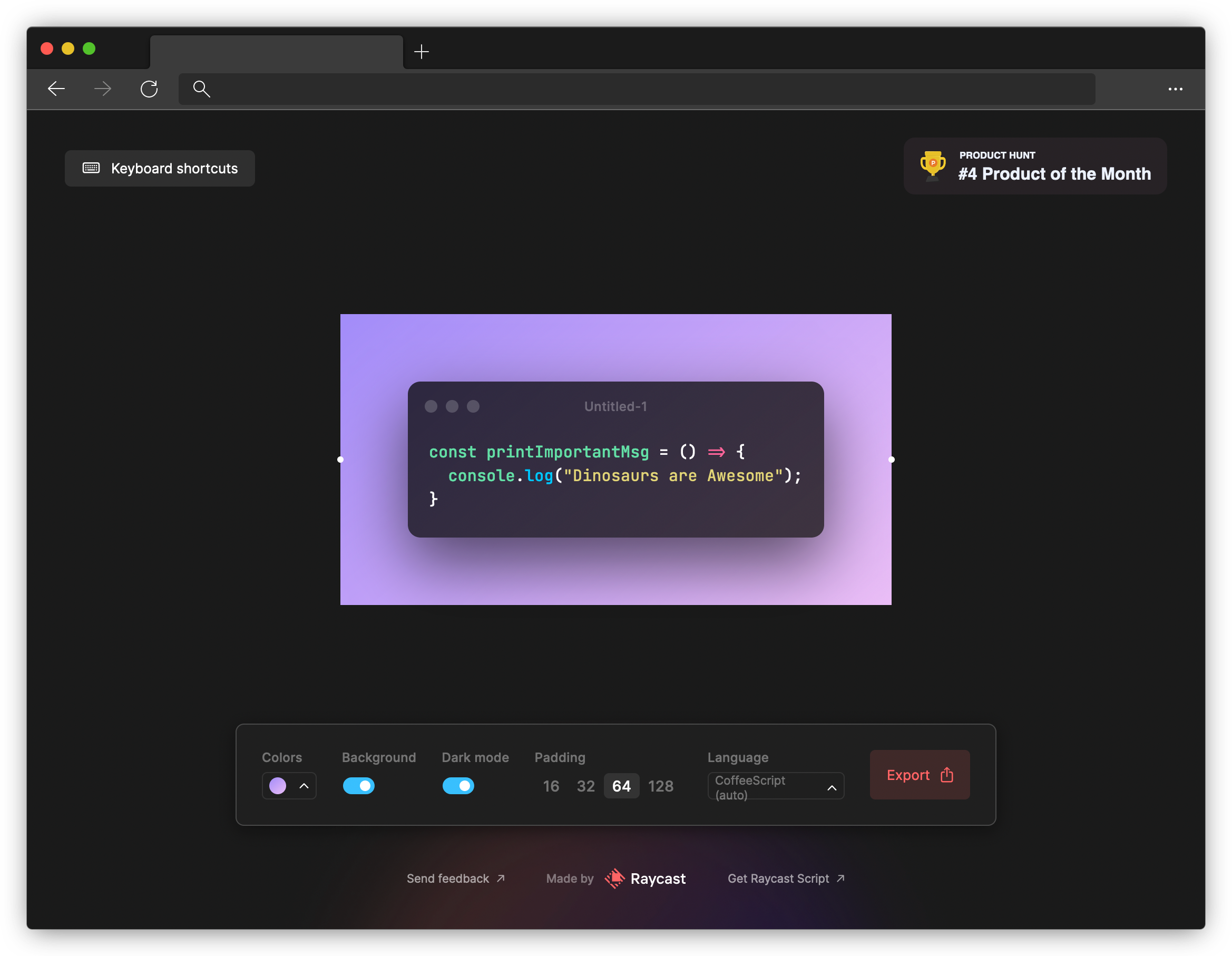 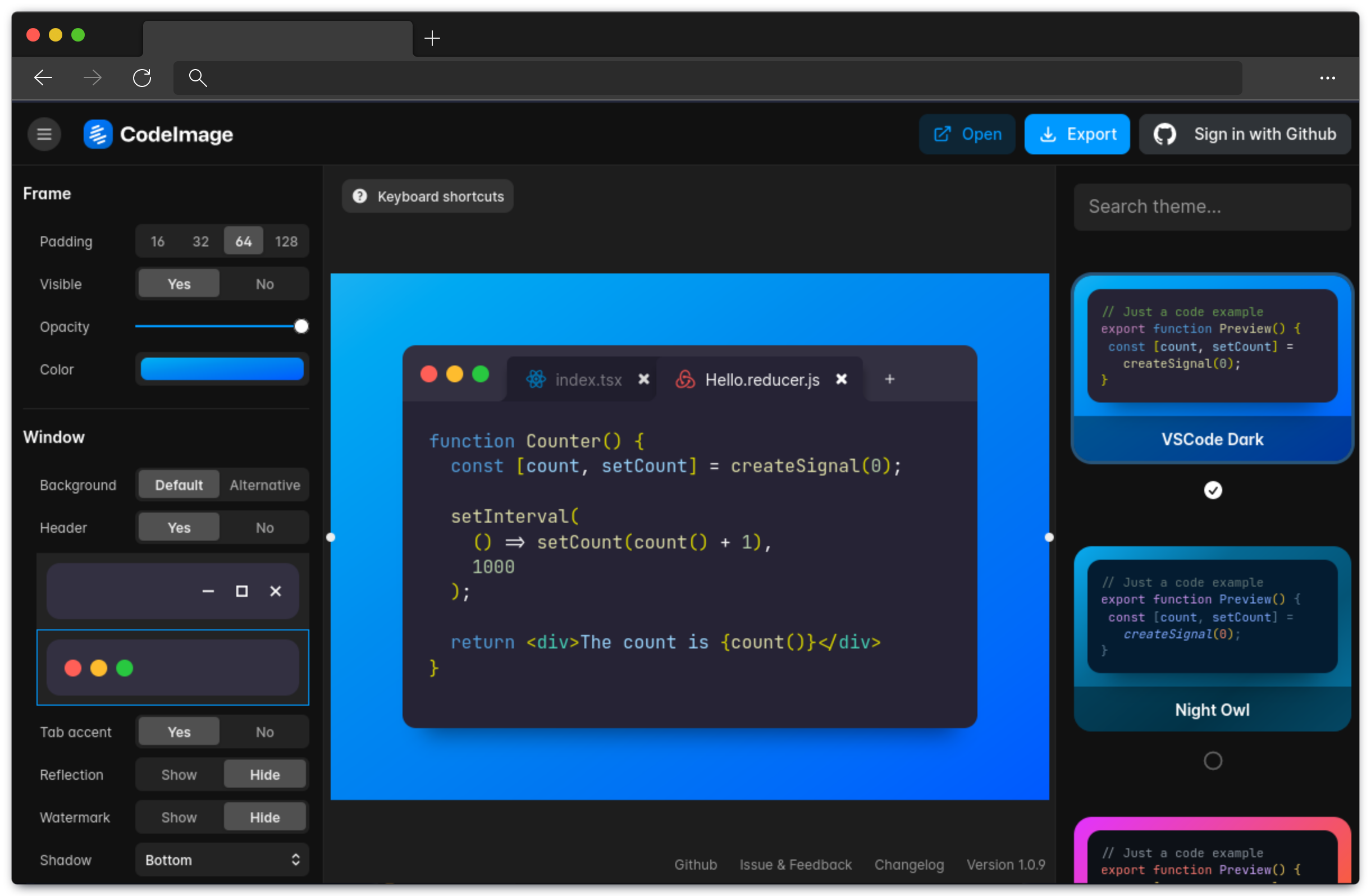 Carbon has more advanced styling options. It's open source (view on GitHub) and developed by @mfix22.
You can also directly generate an image from a GitHub Gist, by passing the Gist ID in the URL, for example: https://carbon.now.sh/9da07fe8b877801f7814424a00acbe90 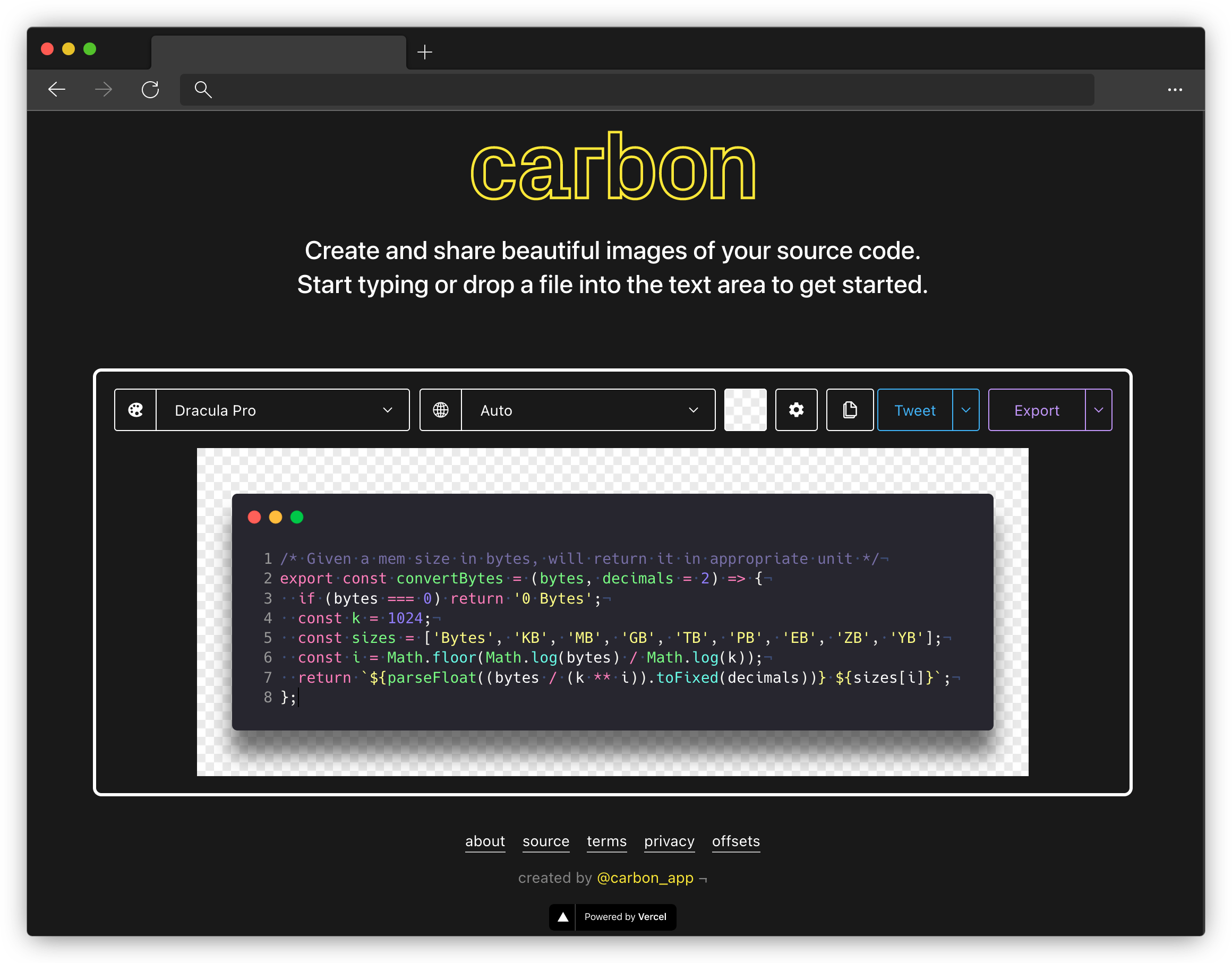 Chalk.ist is another clean and simple option, it too is open source (view on GitHub) developed by @Idered. 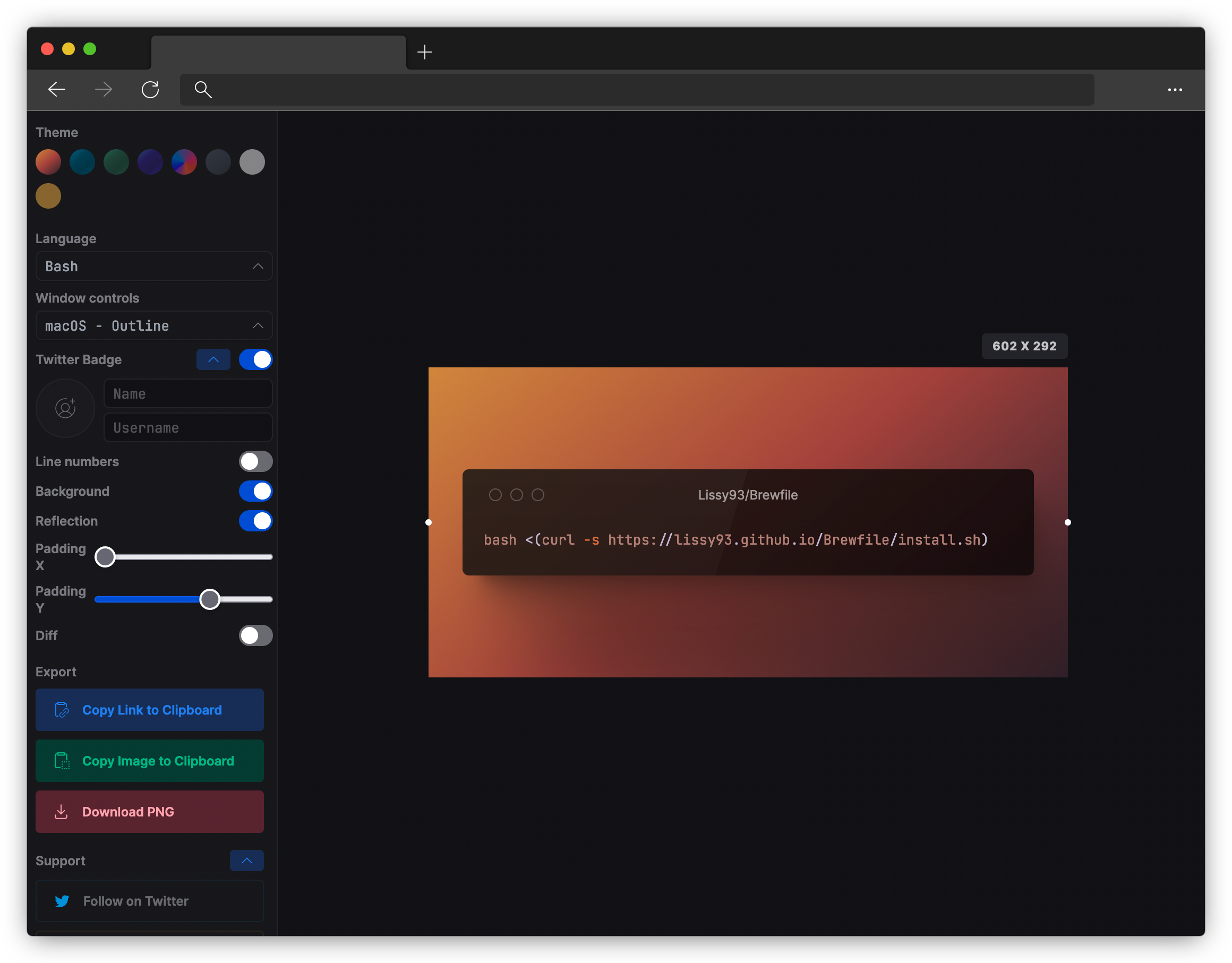 Snappify is a snippet manager, but also includes a nice tool for generating screenshots. Login isn't required, but some extra features do need a user account. There's also a VS Code plugin, and the option to embed code into blog posts 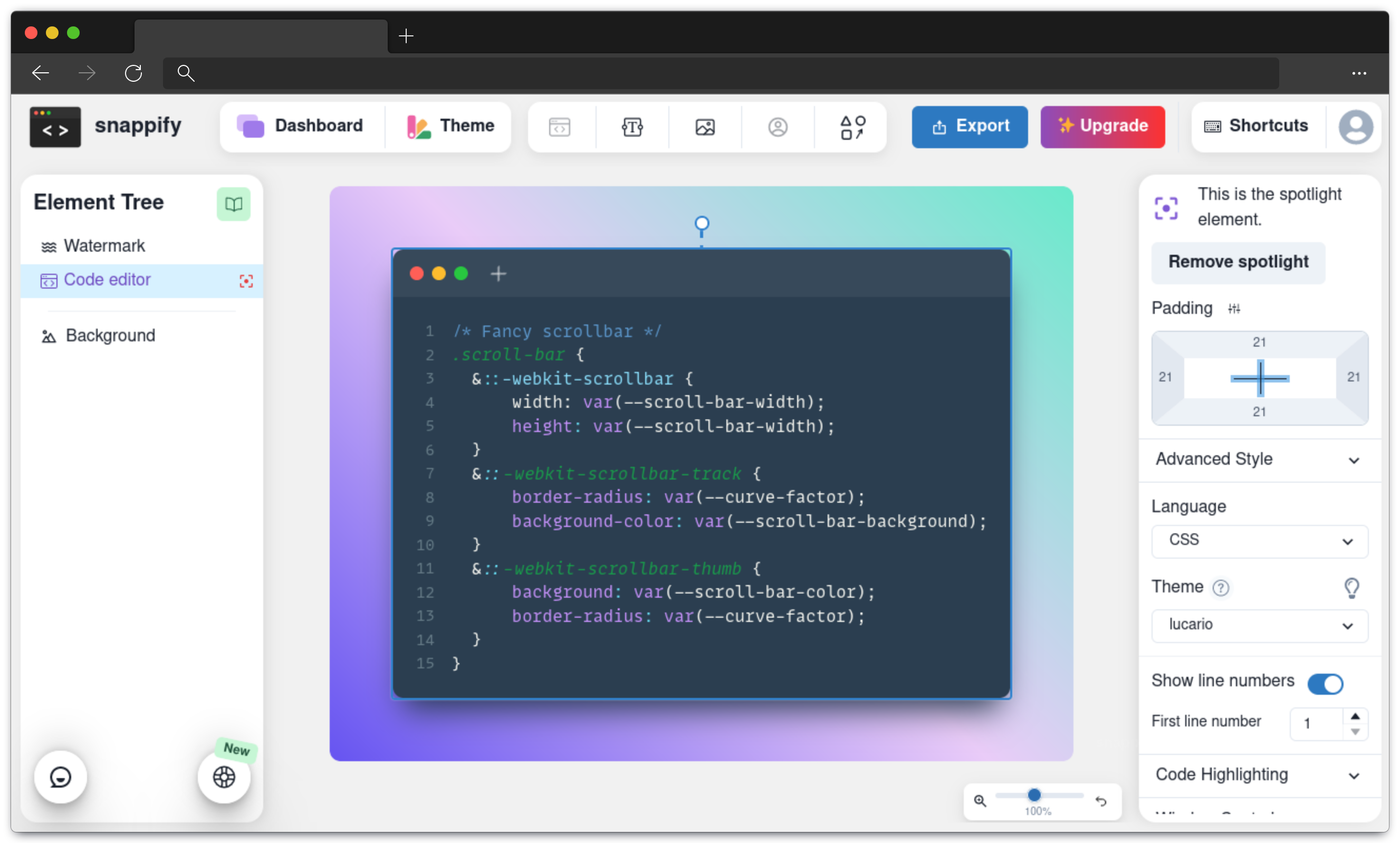 CodeKeep is another snippet manager, but what makes their screenshot tool unique is the many options for customization. You can add text, annotations, icons and include multiple snippets in a single screenshot 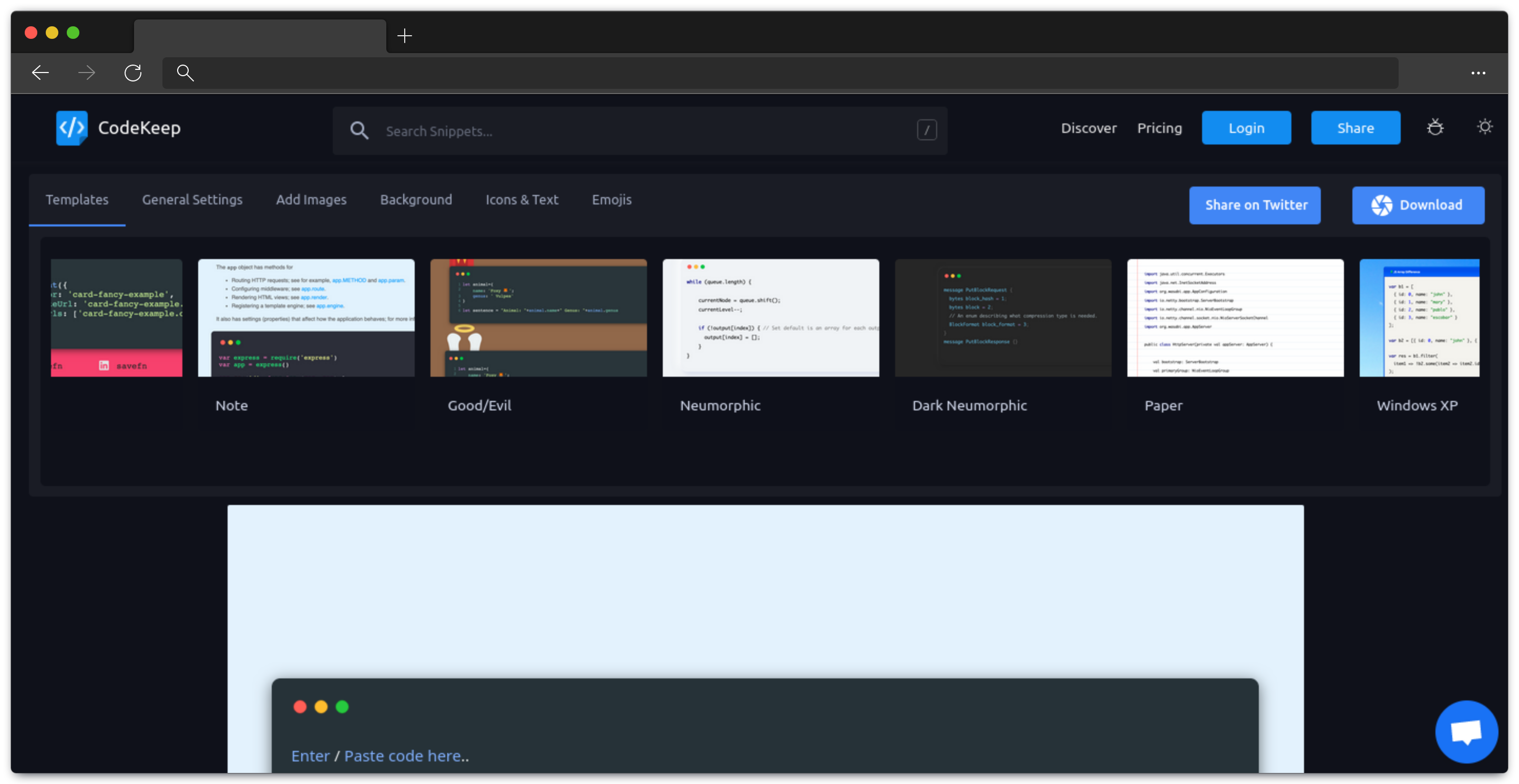 CodeImg.io is great for social media posts, with a series of templates optimized for various websites. There are a range of themes to choose from, support for SVG exports, and many customization options. Developed by @iduspara, but not open source. 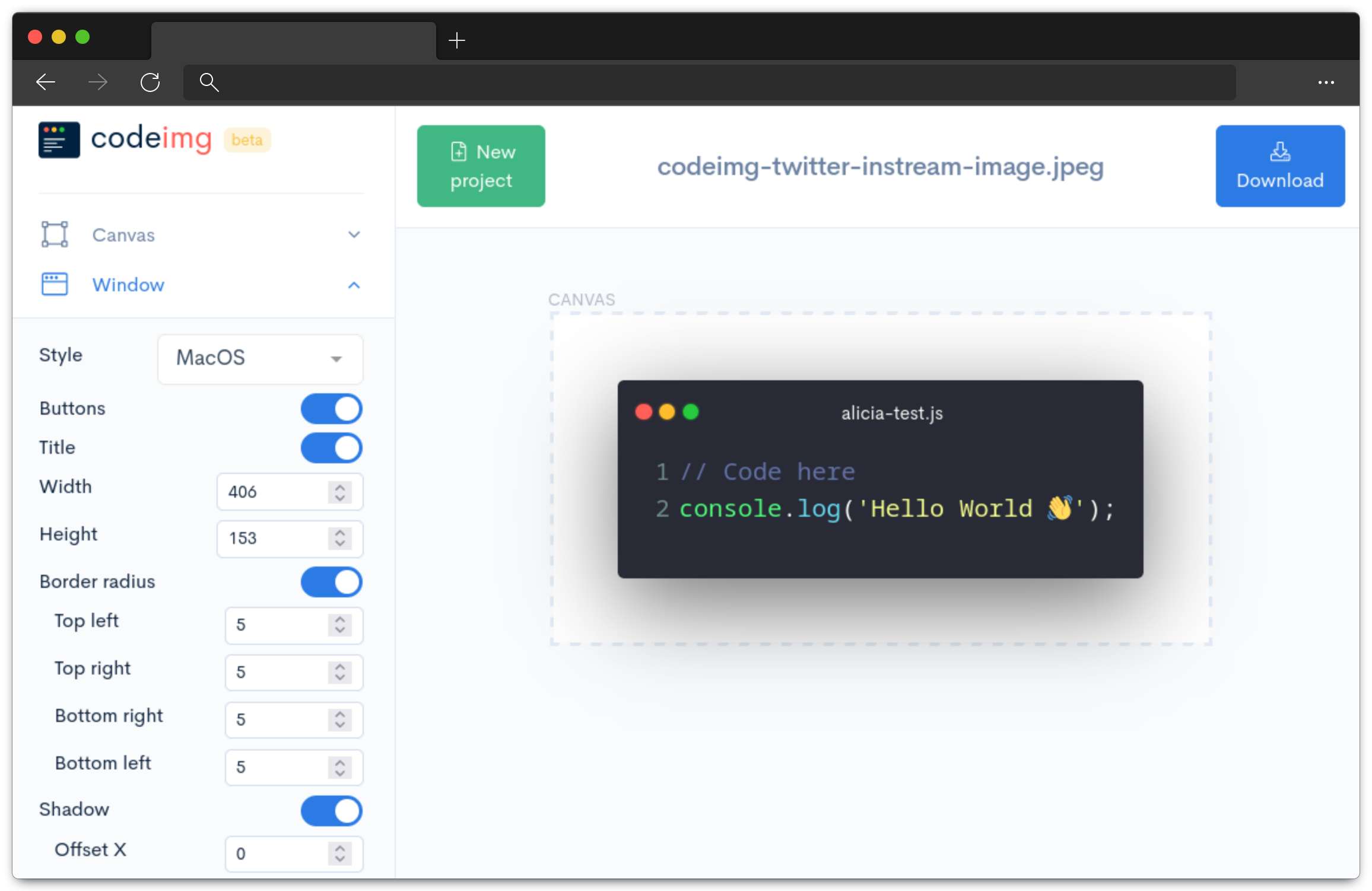 SnippetShot.com is great for clean and simple code snippets. A variety pf backgrounds, themes and fonts, and the ability to add an attribution link, as well as Gist import, unique links and SVG export. It's developed by Marco Slooten, and is not open source 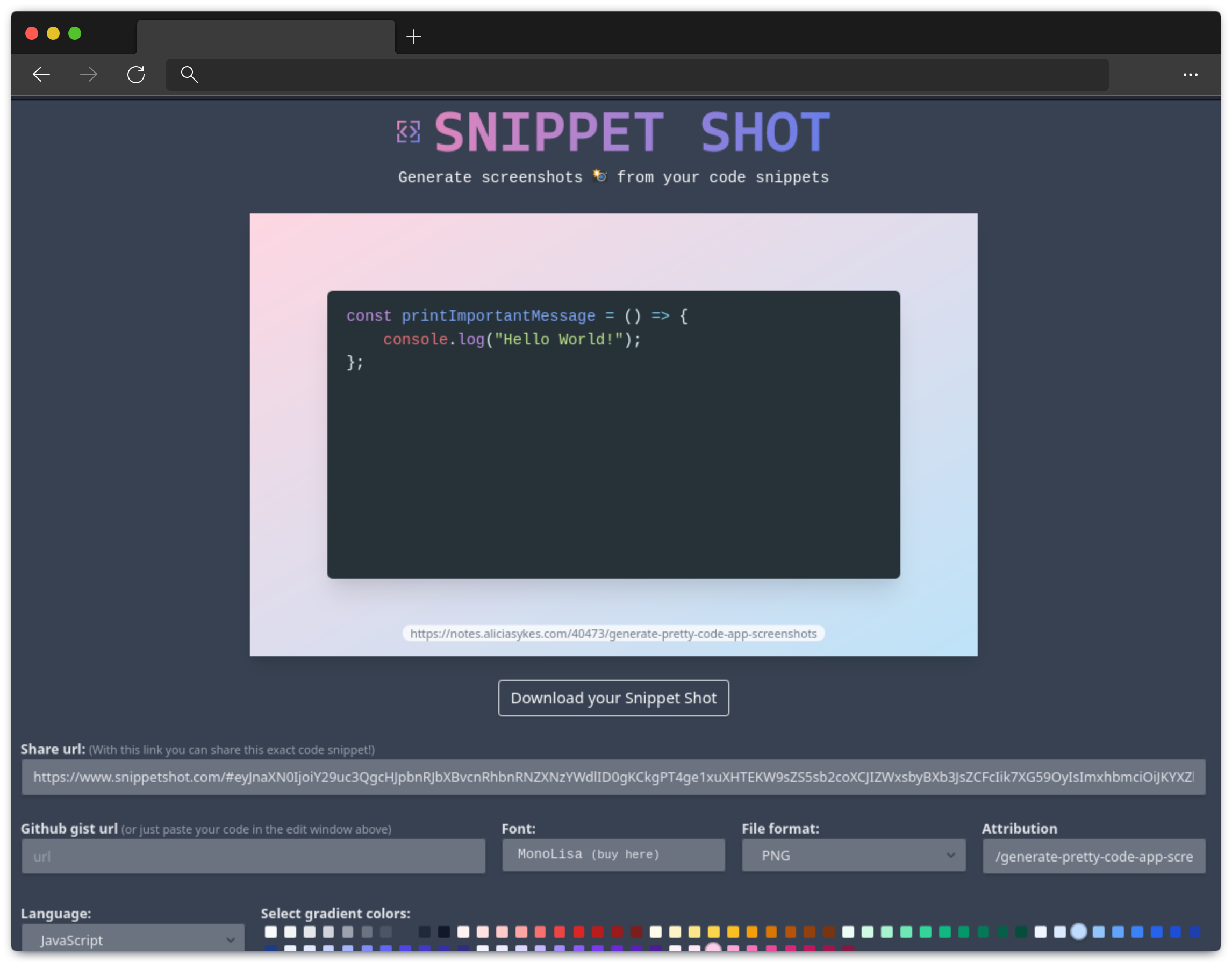 While we're on the topic of code screenshots, I have to mention a few really neat IDE extensions which help you take great screenshots, directly from VS Code.

Browser Frame, developed by @pqvst creates clean and minimal web browser mock-ups, with a range of browser frames in both light and dark mode supported. 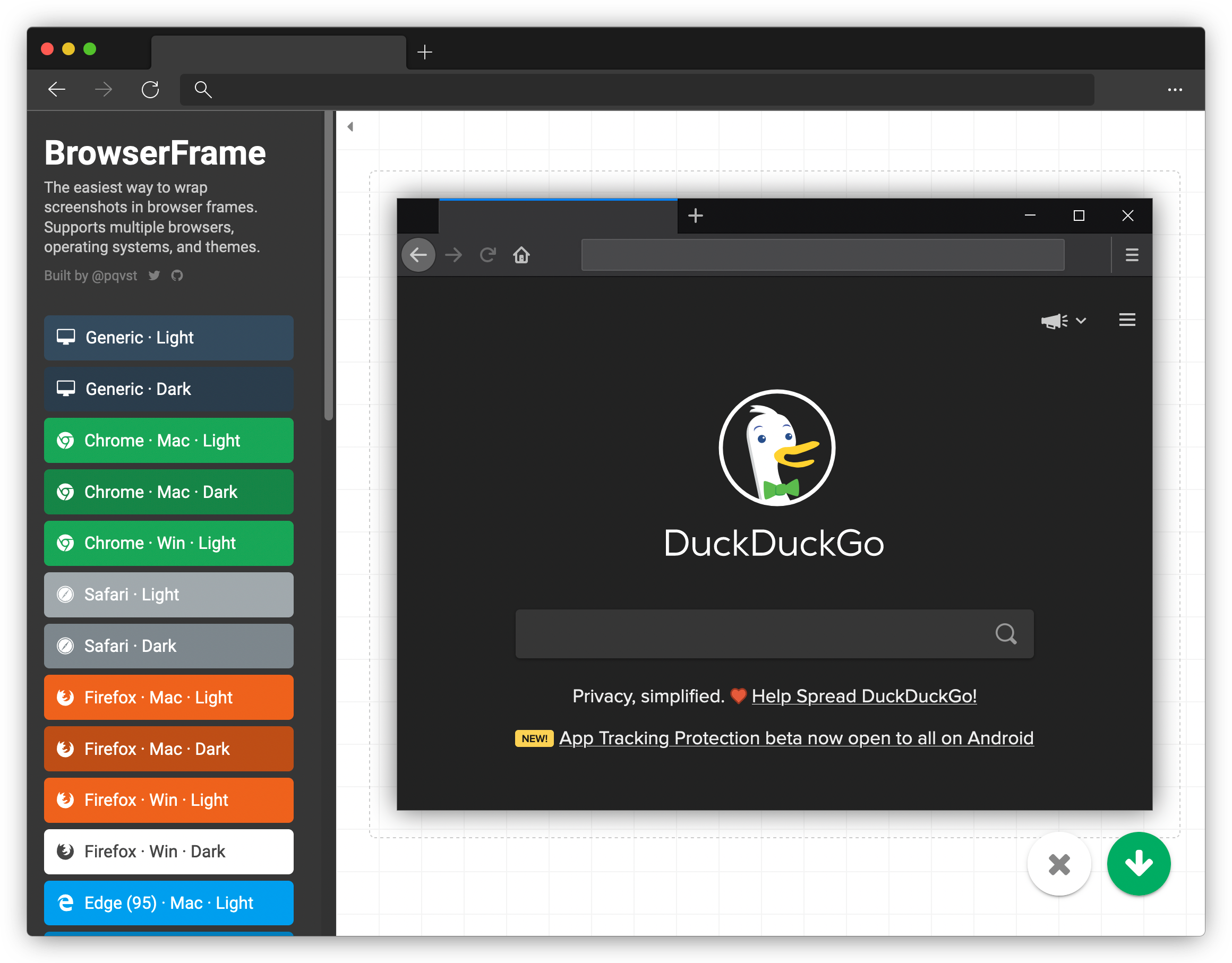 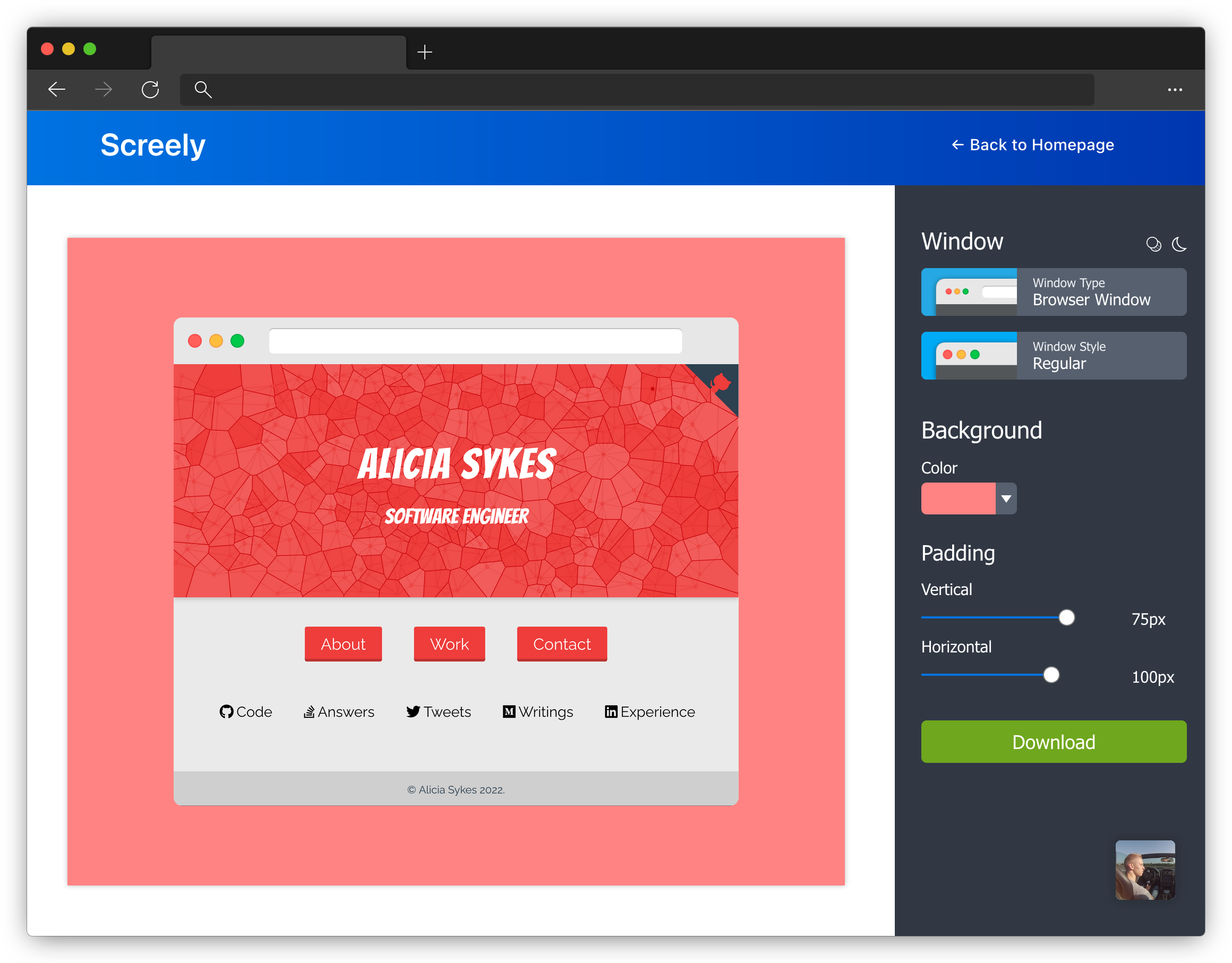 Mock up Phone by Authgear has a range of different mobile, tablet, laptop and large screen device frames, which are easy to upload images into. But keep in mind the screenshots ratio must be correct to avoid it being stretched. 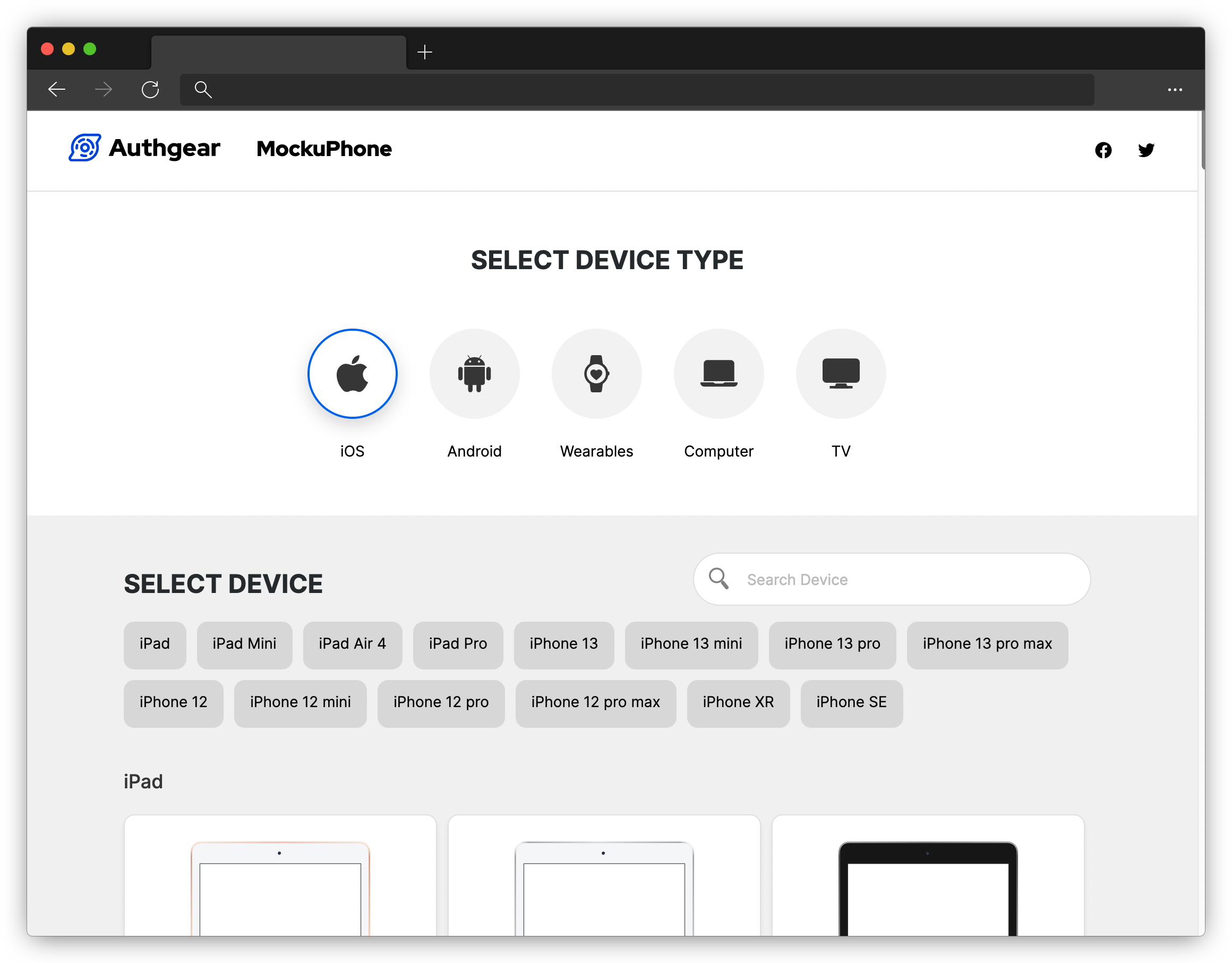 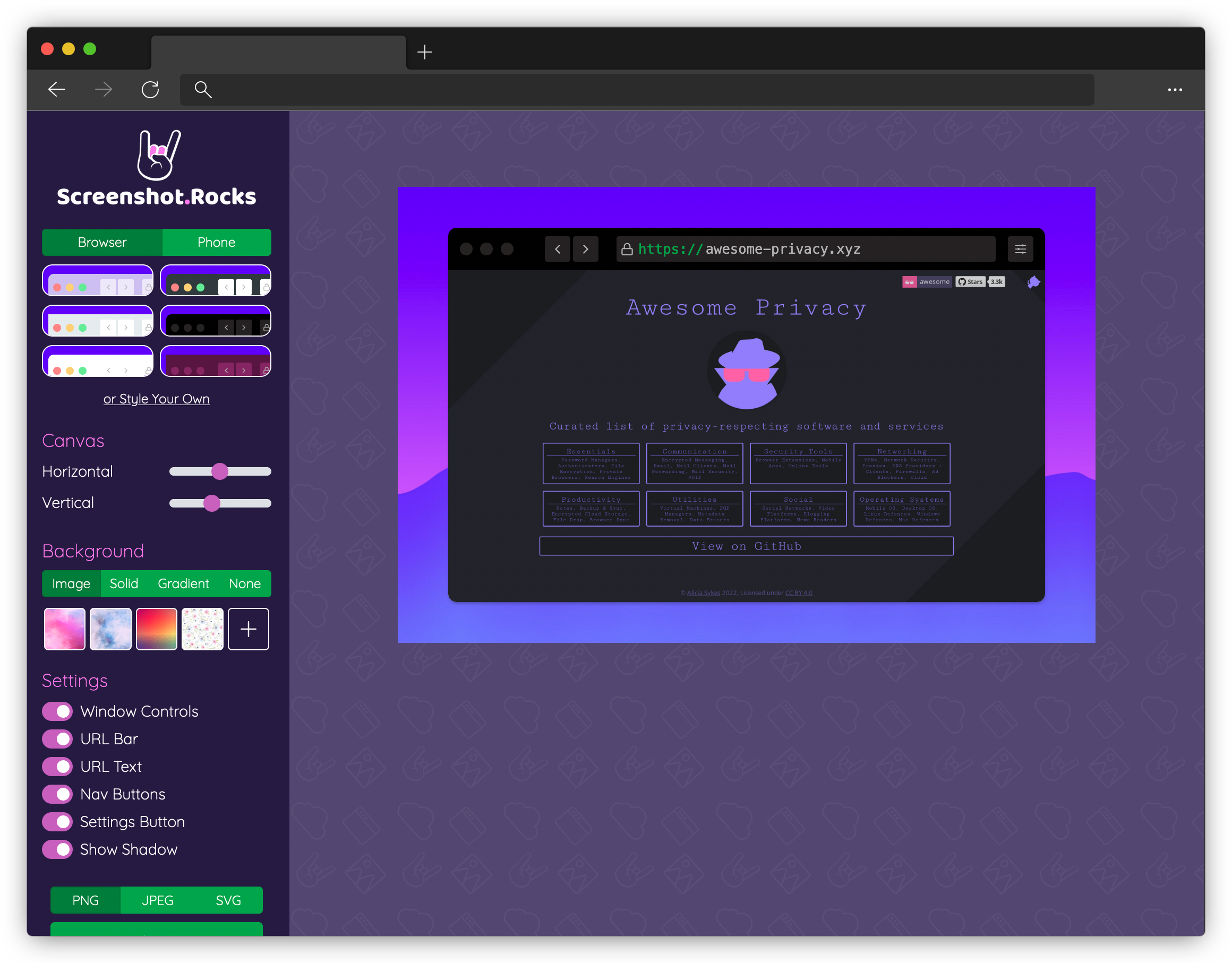 Unlike other options on this list, The App Launchpad does require sign up, but it's free to use. It's a tool that makes it easy to build beautiful screenshots for your app, optimised for publishing to Google Play and the Apple Store. 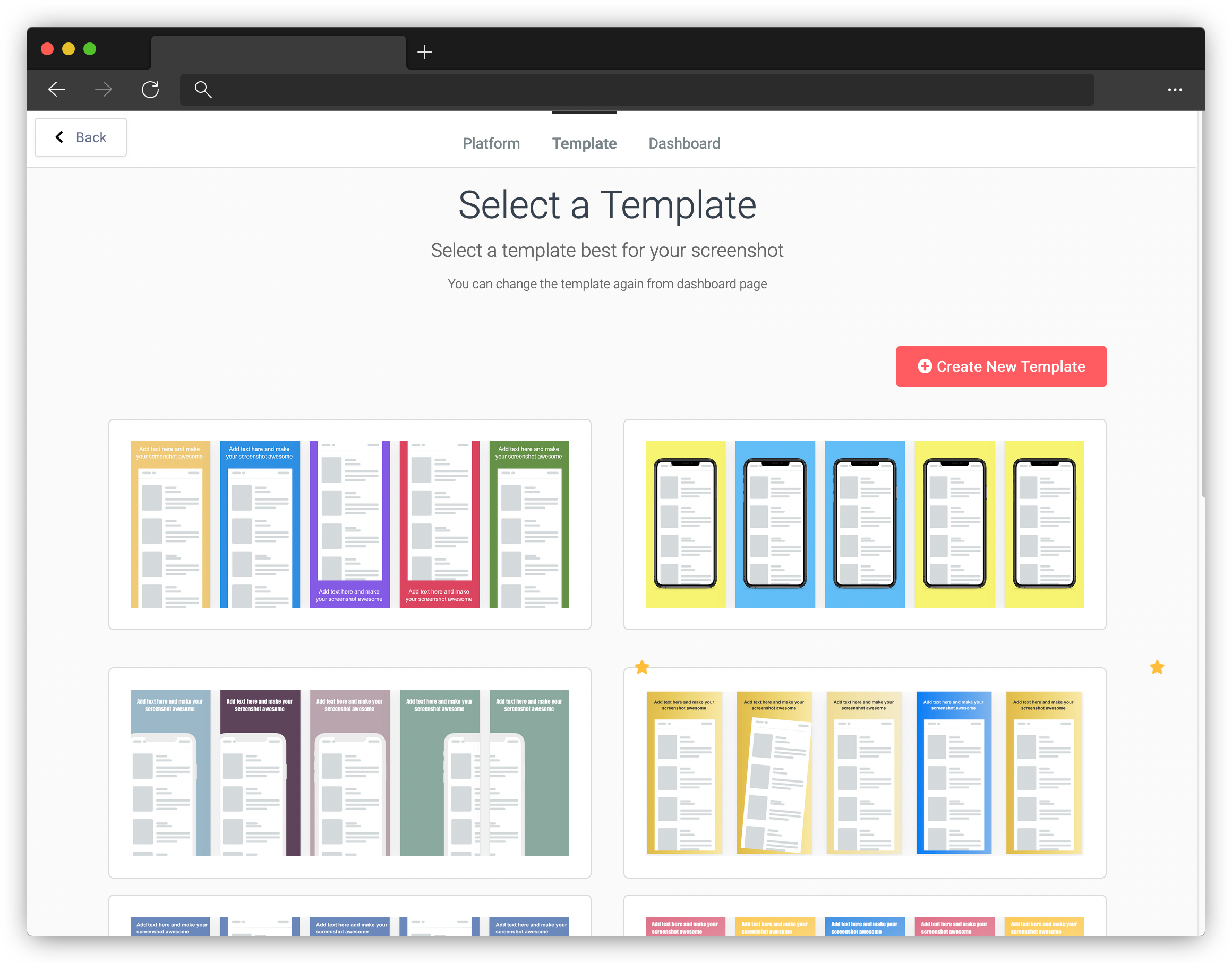 Magic Mockups, developed by Kaspars Sprogis is an older tool, but still very useful if you want to generate mockups displayed on a physical device in real-life situations. Note that your screenshot needs to be exactly the right ratio, to avoid it being stretched or cropped. 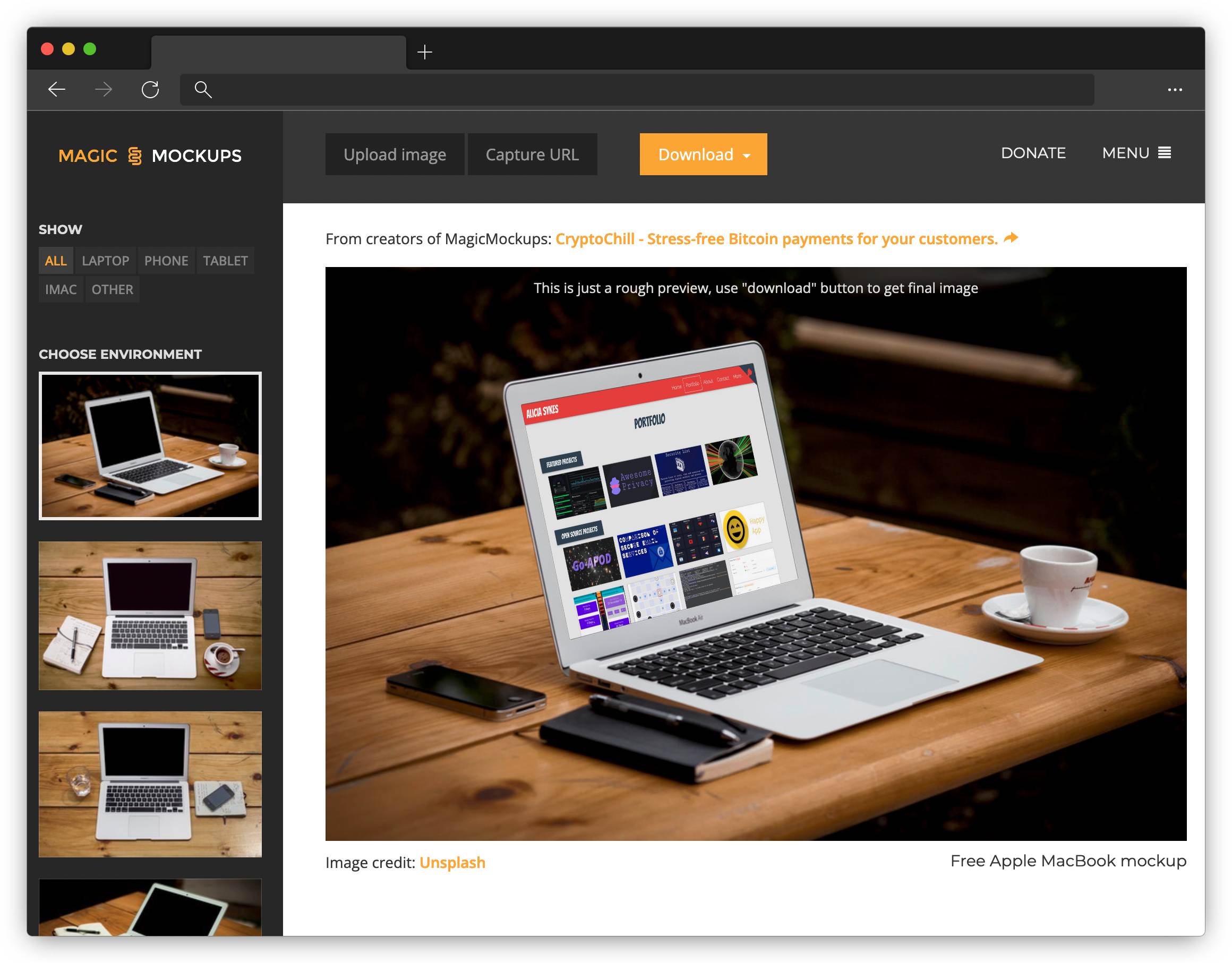 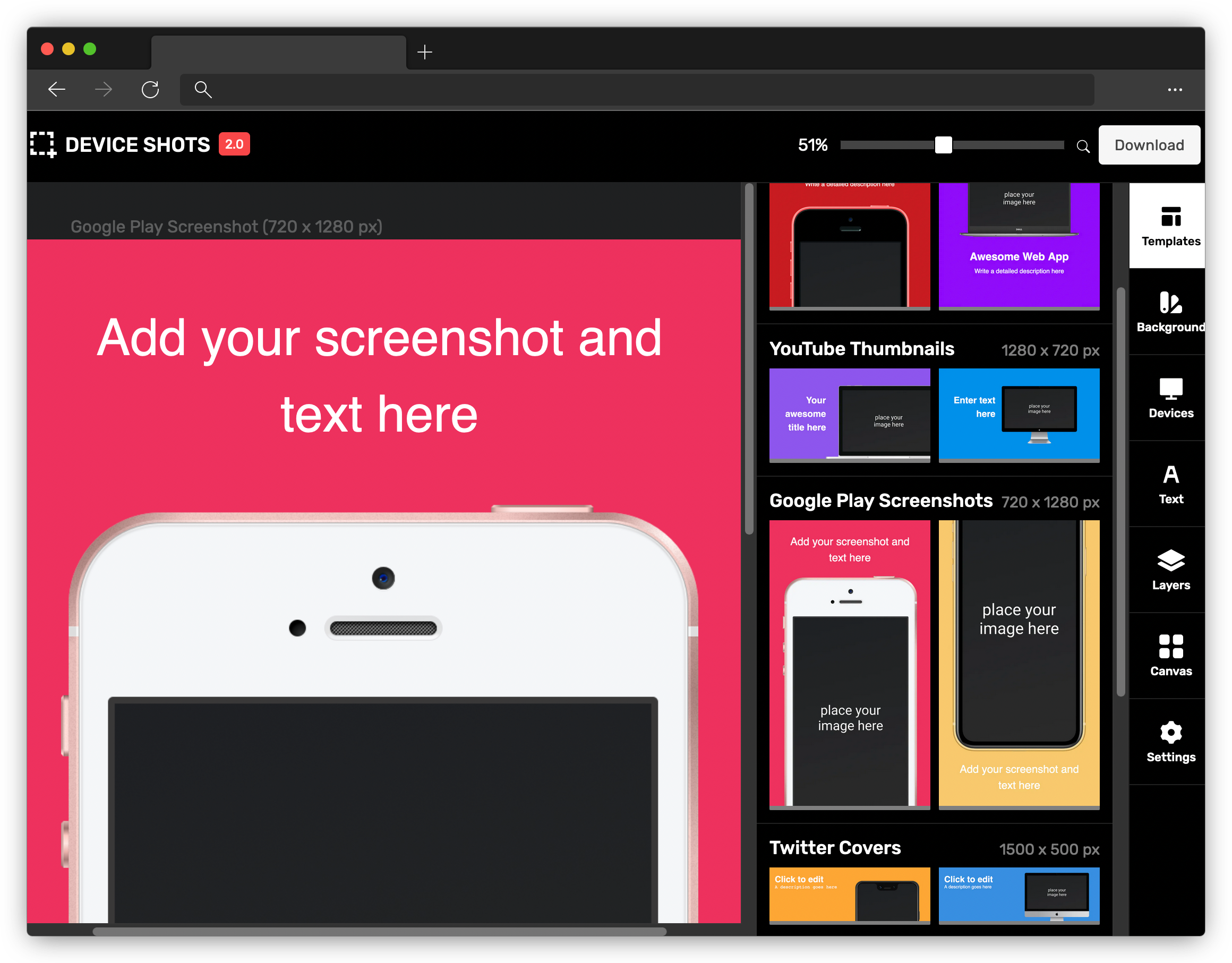 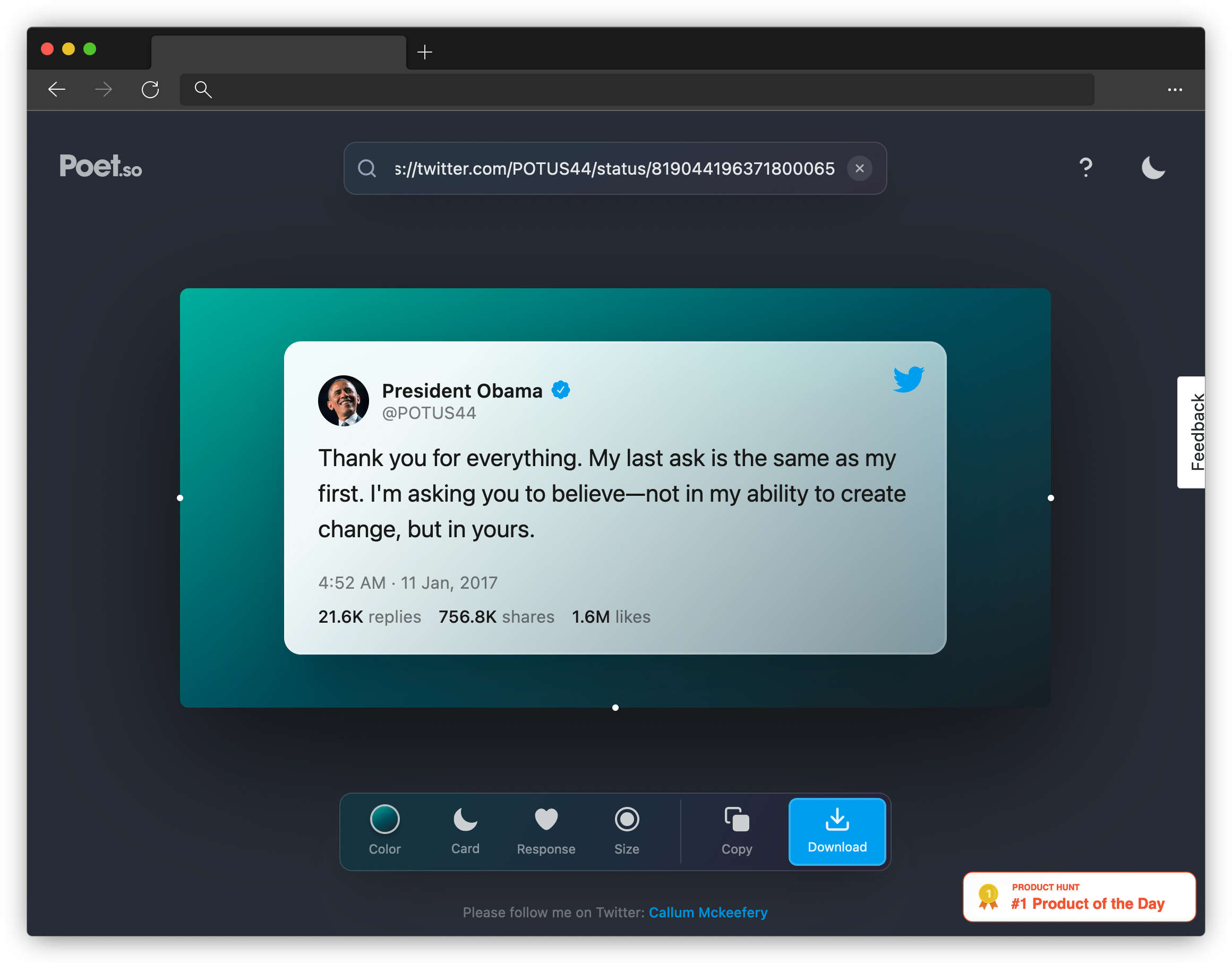 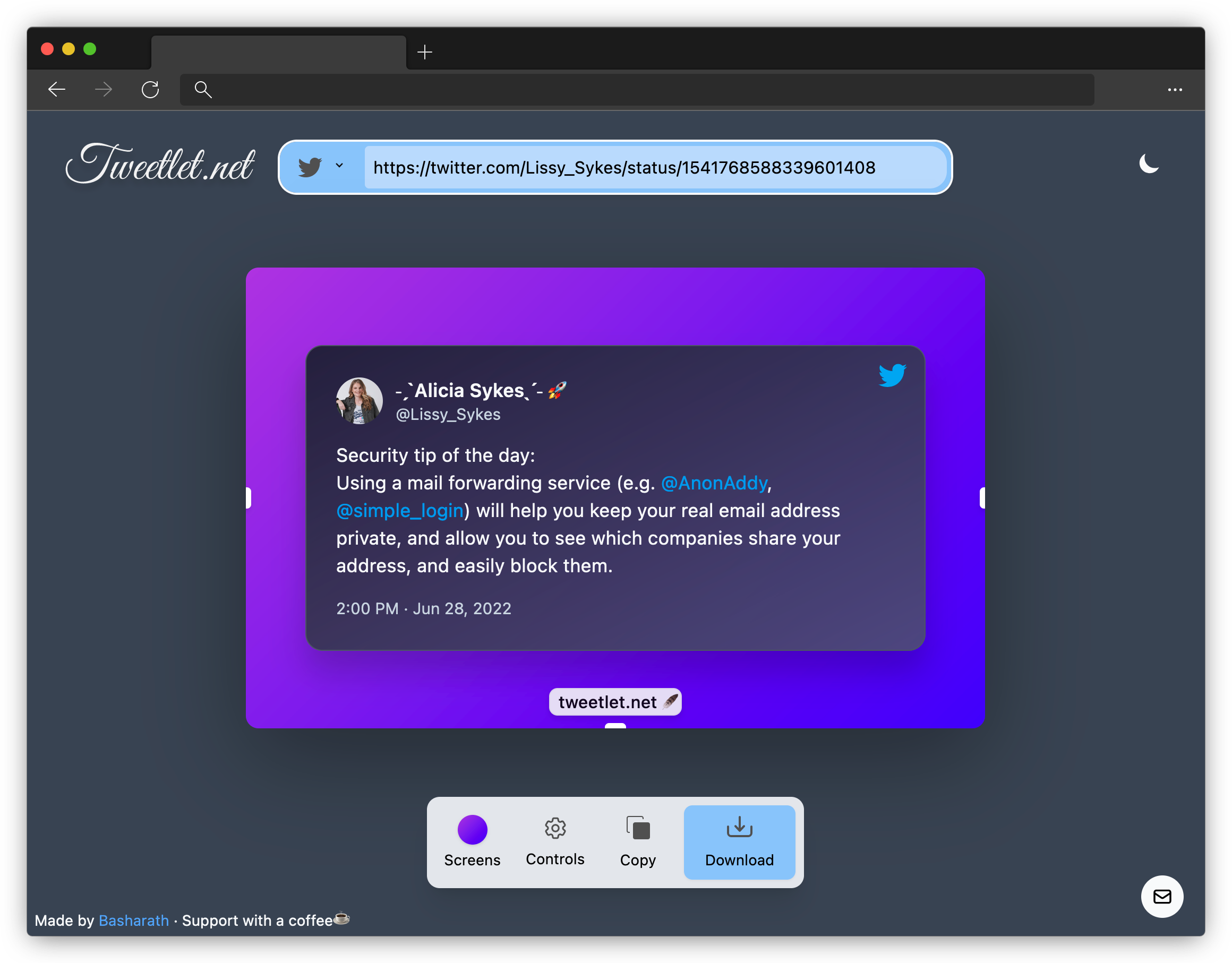 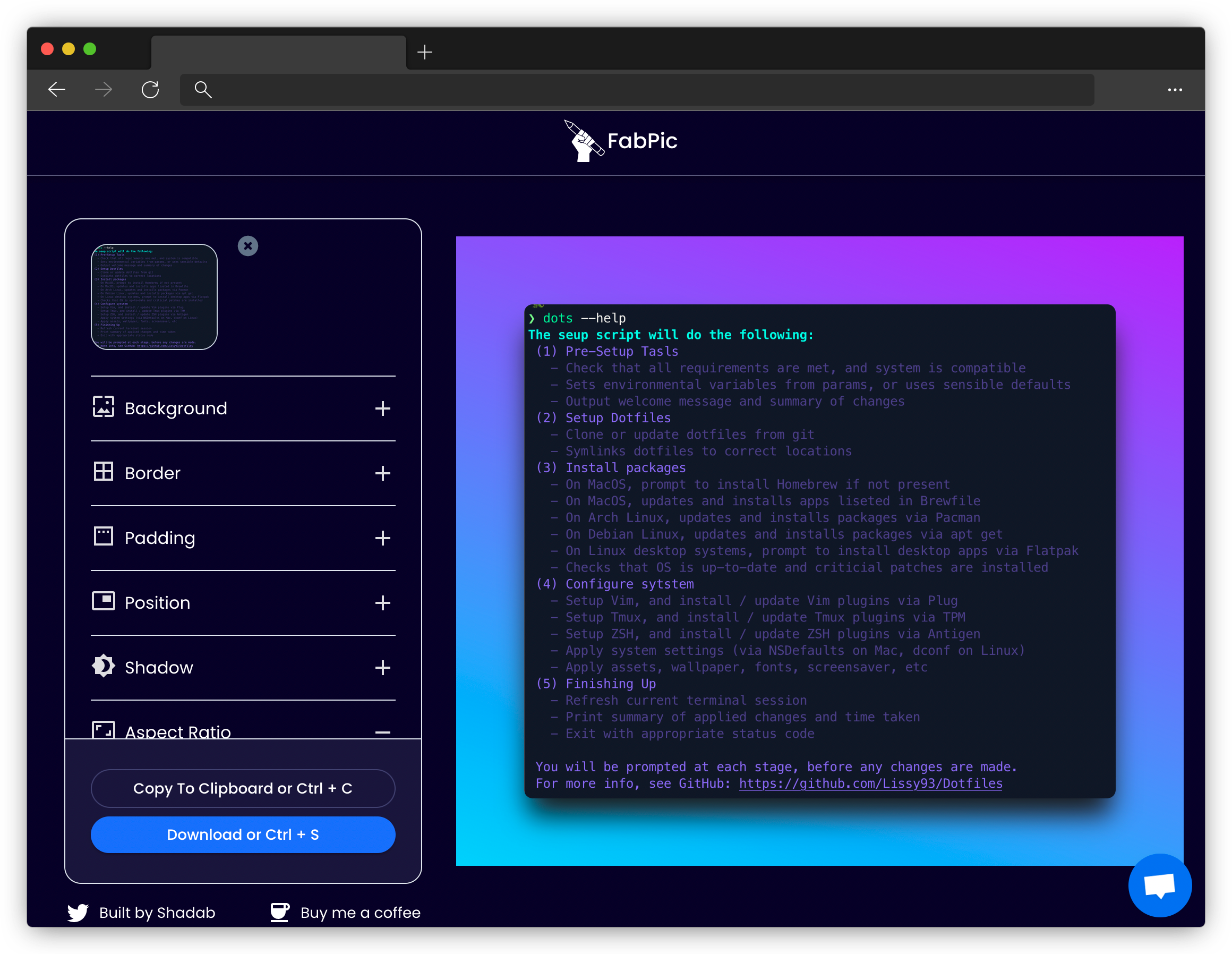 SuperShots by Superblog is a simple tool to add gradient backgrounds to a picture. It's similar to PrettySnap, which also supports patterned backgrounds 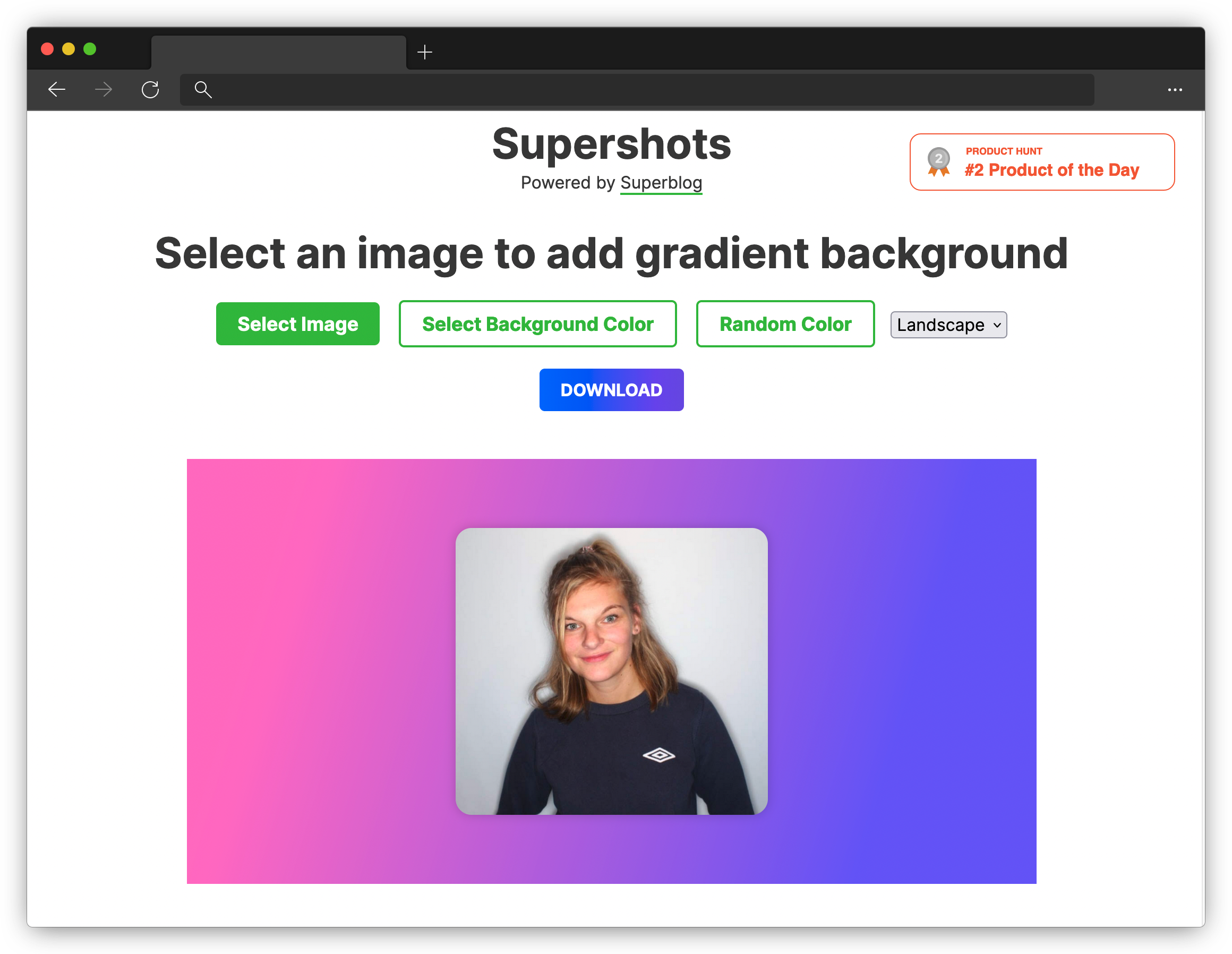 Finally, PrettySnap.app applies custom patterned backgrounds, shadows, and border radius to images. It's made by @kanga_bru, and there's also a Windows App 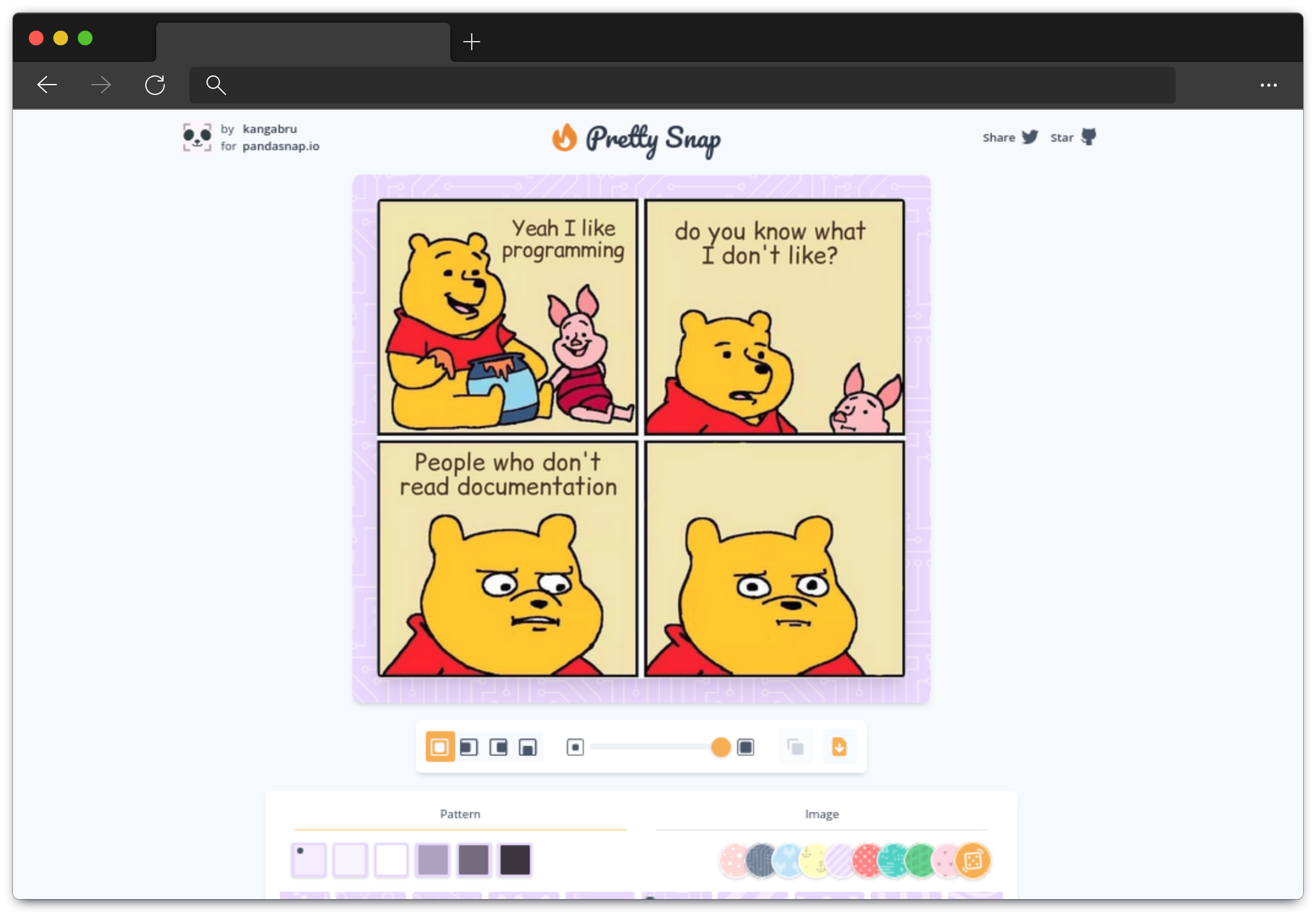 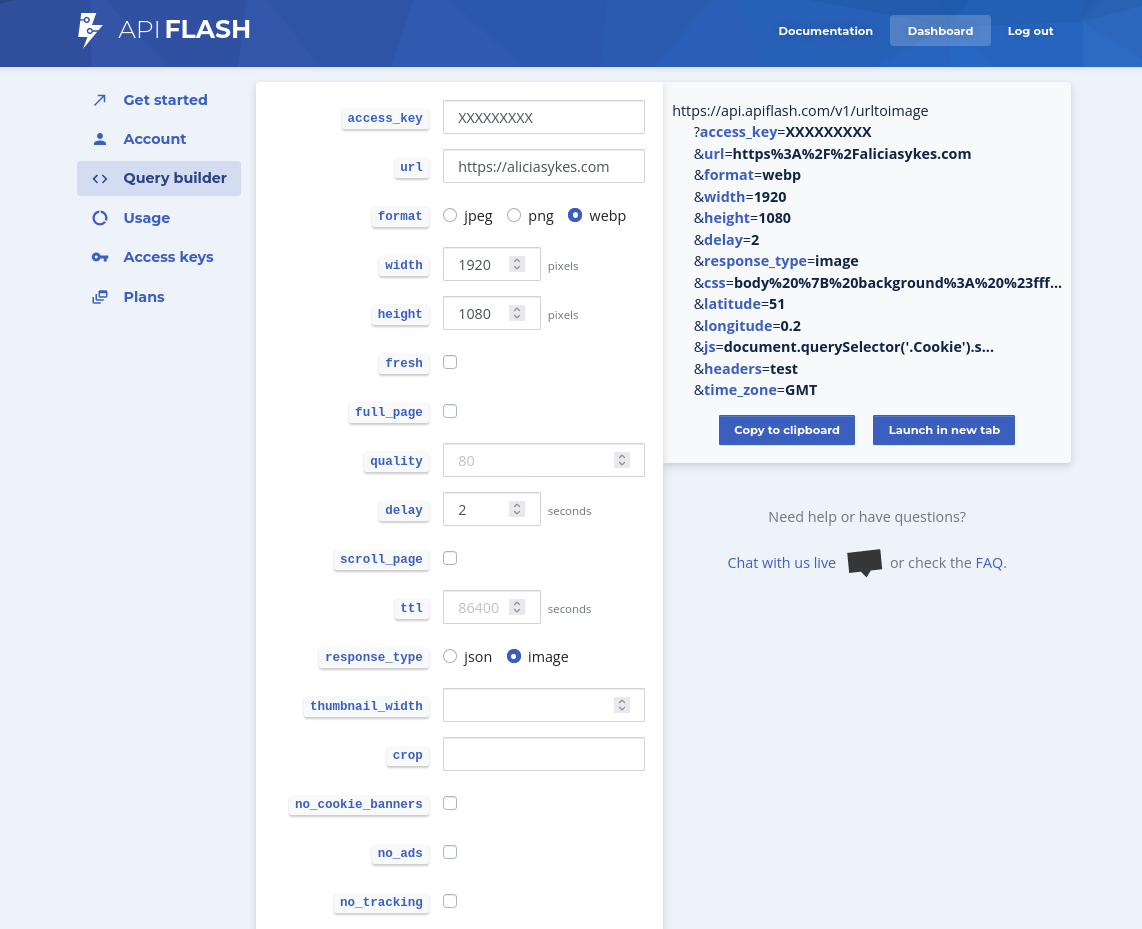 There's plenty of screenshot API services out there, but API Flash is one that I've personally used across countless projects. You can generate a URL which resolves to a screenshot of your website and pass in parameters to configure it (like custom CSS, element selector, device + resolution, timeout delay, no ads / cookie banner, etc).
Although you only get 100 scr/ month on the free plan, there's an option to set the cache time, which makes it easy to stay within that limit.

Flameshot is a free and open source (here on GitHub), cross-platform (C++ for Win, Mac and Linux), highly customisable desktop screenshot app. It's simple to use, includes some nice features like an in-app screenshot editor, and most importantly has an integrated command line interface. For Windows users, ShareX is super powerful

If you use Firefox, you can capture screenshots right from your browser. Just right-click on any part of a website and select "Take Screenshot" (or Ctrl + Shift + S). From here, you can either capture the entire page, a selection, or specific HTML nodes.

Finally, the ImageMagick package includes a screenshot util with plenty of customisation options, and can be invoked from the command line (with import), or integrated into a script.

And if you need to create visual step-by-step guides, there's several extensions that will help with this, including: Tango.us, ScribeHow, Minervaknows, etc.

You'll only receive email when they publish something new.

More from Alicia's Notes 🚀All posts

The browser developer tools are incredibly powerful, with new debugging and optimisation features being added every few months. The following post outlines 50+ awesome tips, that you can use to supercharge your web development experience. Design Mode Enabling design mode will make the entire web page editable, just by clicking and typing. To use it, open up the console and run: document.designMode = 'on' Pretty Print Raw files are usually minified, and therefore hard to read. Use t...
Read post

View on Dev.to: A collection of 70 hand-picked, web-based tools which are actually useful. Each will generate pure CSS without the need for JS or any external libraries. Full credit goes to the authors behind each of these apps (where possible I've linked to their GH/ socials) Contents Property Generators Animations Backgrounds Color Tools Typography Loaders Layouts Informative Property Generators 1. Neumorphism Generate Soft-UI CSS styles using inset shadows, by @adamgiebl 2. S...
Read post